You are here: Home1 / History

The project started in 2012 when the City of Vaasa and the municipality of Umeå decided to found a shipping company together in order to ensure a reliable ferry connection between Vaasa and Umeå. NLC Ferry Ab Oy was founded and got the marketing name Wasaline with the aim to build a brand-new top of the line vessel in the near future. An old vessel built in 1981 was bought to operate the route. Several EU projects were linked to the ferry project and the work to get funding started. Meanwhile Wasaline had to prove that the route filled a function and was needed.

Kvarken Link Ab was founded in 2015 and in 2019 Kvarken Link Oy was founded by the same owners, the city of Vaasa and the municipality of Umeå to secure the funding and to run the whole new build project. 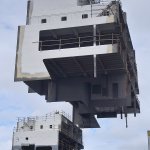